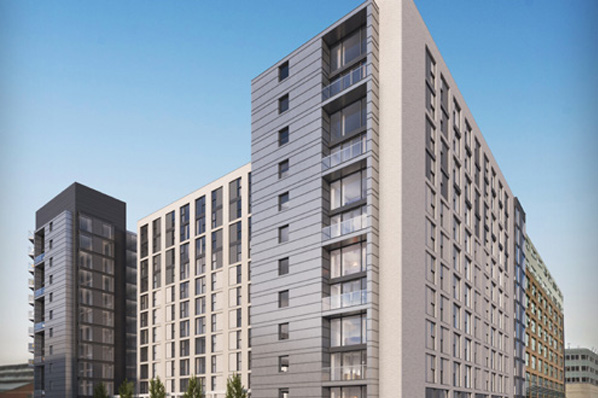 Rockspring, on behalf of its TransEuropean VI LLP fund, has agreed a deal with Hallmark BY Development, a joint venture between Bouygues Development (which has subsequently been rebranded Linkcity) and Hallmark Investments, the current landowner.

Linkcity will act as the developer and delivery partner through Thomas Vale Construction, a Bouygues subsidiary.

This is Rockspring’s second foray into PRS investment following the acquisition of a 145,544 sq ft development in Southampton in August 2015, which is also being undertaken in conjunction with Atlas, which is one of the largest private rented sector operators in the United States.

Paul Hampton, Rockspring partner and fund director of TEP VI, said: “The acquisition and development of this PRS scheme is in line with TransEuropean’s strategy of participating in urban regeneration activity in certain key cities across both the UK and continental Europe.  We are actively looking to replicate this sort of transaction, not just in the UK but elsewhere in Europe where we see evidence of similar themes and trends.”

It is located on the former Leisure Box site, the new scheme, which is known as The Beacon, will be adjacent to Birmingham City Council’s major Smithfield regeneration project, a short walk from the Bullring shopping and leisure centre and a ten minute walk to both Birmingham New Street station and Grand Central.

Jonathon Ivory, managing director at Atlas UK, said: “We are excited to be partnering with Rockspring once again in what we believe is another very positive endorsement of our strategy to seek out value and opportunities in regions throughout the UK that display exactly the same fundamentals that we look for in our U.S. acquisitions, namely positive population growth in job engine locations with excellent transportation combined with an acute supply / demand housing imbalance.

“Atlas will operate this property by applying its global portfolio management model, which has been developed for the purpose of leveraging the benefits of being a large and geographically diverse real estate management company whilst recognising that ‘all property is local’ and being able to maintain entrepreneurial attitudes and flexibility on the ground.”

The project was designed by Corstorphine + Wright and is already under construction and due for completion in early 2018, it will total 174,000 sq ft over 11 floors, providing 334 modern apartments for rent.  The development will offer five studios, 262 one-bedroom and 67 two bedroom apartments.

Adrian Willet, senior director and head of CBRE’s residential development and investment team, who advised the joint venture partners said: “The Pershore Street site was earmarked for residential development some years ago, but it is only with the rapid growth in rental and capital values in Birmingham and the increasing maturity of the build to rent sector that this project has become a reality.”